It may be hard to believe, but apparently it happens. A worksheet in MS Excel can be assigned a name consisting of a single space character.
Leaving aside the questions of who makes use of this and whether it makes any sense, the FlowHeater Excel Adapter now functions properly with a sheet named with a space character. 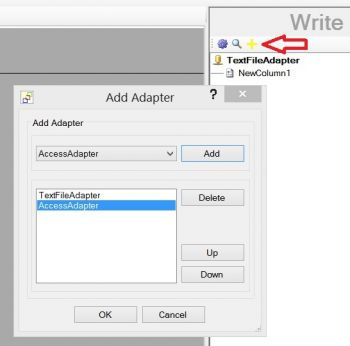 A much requested feature has arrived: FlowHeater now supports Definitions with multiple Adapters, significantly advancing its flexibility. On the WRITE side, using the plus sign option over the Adapter section you can add as many Adapters you wish, including those with differing types. For example, it is now possible to setup a Definition that easily performs both an SQL database import and at the same time outputs a CSV report to log the actual data as it is imported by adding an extra TextFile Adapter to the Definition. Or you could use two or more database Adapters on the WRITE side to fork the data and so implement a 1:n database relationship. A further use might be to make use of the automatically generated auto-increment values in a database to assign specific fields across a “secondary” detail Adapter using the FlowHeater default value property.

We were frequently asked: How can I license FlowHeater for runtime use by my clients? Our latest product "Runtime Designer" effectively makes this problem a thing of the past. You can now create Definitions with the Runtime Designer that are fully functional including use of the Batch Module for your clients who only need to download our Freeware Version. In addition, your users can make changes with only mild restrictions to the Definition themselves. However, to protect your development from your clients making unauthorized changes each Runtime Definition is encrypted and password protected.

The Oracle Adapter has been completely reworked and improved. What is new in this version is that a direct connection to an Oracle database can now be established without the need for a locally installed Oracle client.

Support for Windows 8 and Windows 2012 Server

FlowHeater GmbH has released FlowHeater Designer v. 2.5, a powerful Windows application that imports, dynamically converts, and exports data. Unlike complicated data conversion software, FlowHeater Designer offers a simple way to transfer data between all popular database formats. Your programming staff can train your end-users to do much of the design and conversion work. Using an intuitive graphical user interface to define the modifications needed to transform your data, you simply move it from place to place. FlowHeater Designer streamlines data conversion, and eliminates cost overruns and missed deadlines.