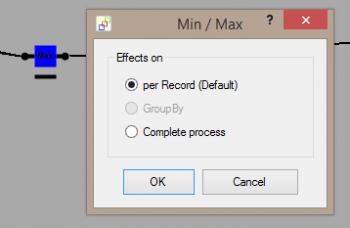 Aggregation functions Min/MaxWith this version the Min and Max Heaters, each of which determine the lowest or highest value for a record or row, is extended with two powerful new features.

The TextFile Adapter was extended by version 3.3.0 with a function that made it possible to input columns of CSV text files that contain line breaks. However, empty rows with no content were subsequently interpreted as new columns and this led to column displacement. This version corrects the error.

The use of Parameters is powerful feature making dynamic data import/export Definitions possible. Until now setting a Parameter for filter conditions only worked in Memory Mode. As of this version, Parameters can also be used for filtering in Massdata Mode.

Bug Fix: Results display when no output is generated