The Excel Adapter has undergone a complete overhaul for this version and now sports a host of new features. For instance it is now possible to perform updates of Excel rows/records in a similar way to the database Adapters and you can choose whether data is inserted, updated or both options used in combination. According to key fields you define, the Excel Adapter checks whether the record exists for updating or else will insert it into the sheet. The target area of the sheet for imported data can optionally be cleared before the import starts. This makes sure that when the imported amount of data is shorter than a previous import, no redundant data is left behind in the Excel sheet. 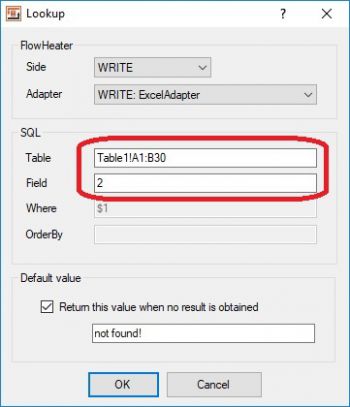 Heater Lookup - Excel VLookupAnother new feature is that the Excel Adapter can be used in combination with the Lookup Heater. In essence this performs the Excel function VLOOKUP on the spreadsheet. The only and rather cumbersome workaround previously available to search and replace data in the Definition was first to export it to a CSV file and then perform a CSV Lookup on this using the String Replace Heater. As of this version such a workaround is no longer necessary.

But that’s not all, further enhancements include:

The Base64 Heater enables saving (binary) data coded and decoded using Base64. This makes it is possible, for example, to embed binary data (pictures, executable programs, etc.) in CSV text files without generating the control characters that can confuse editors.

For tasks of the data monitoring type it is now possible to choose whether after completion of a file move task that a timestamp is added to the filenames or not.

Improved selection of databases and tables in all database Adapters

The selection fields for databases, tables, queries and stored procedures now supports auto-completion to enable more efficient selection in the case of large databases with many tables.

In addition to reporting the applicable field name in errors and warnings, the relevant Adapter name is now also quoted.

The Lookup Heater can now be used in conjunction with the Excel Adapter. In this case the Excel function VLOOKUP is used. After choosing which Adapter should be used the sheet name with an area or range specification that applies for the lookup.

The column index that should be returned from this range can be specified in the “Field” text entry line.

With this version the “third-party” database drivers used by the MySQL, Oracle, PostgreSQLand SQLite Adapters are updated.