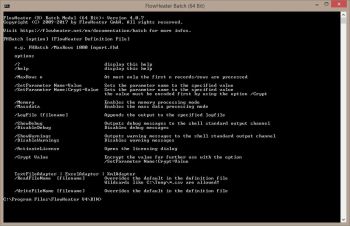 The FlowHeater utility "FHBatch.exe" is a shell application that is controlled by command line parameters and/or control file parameters. You can execute any stored FlowHeater Definition with the batch module, without needing to use the Designer graphical interface to run it. For example, after having tested and saved a Definition set using Designer you can setup everything to run on a Windows Server with scheduled Windows tasks.


The batch module is ideal for a Definition conversion process that takes a long time to run or for frequently repeated tasks. Examples of these are the Import / Export / Update of large databases, which can be run as an overnight batch job, and the automatic creation of a testing data during a development project.

These parameters instruct FlowHeater to run the Definition set ImportTurnover.fhd but only process the first 1000 rows.

Note: If authorization is required to enable connection to a database ( SQL Server, Oracle, MySQL, etc.) for example, the necessary database, username and password details must be stored in the Definition set. For security reasons, all passwords saved in FlowHeater Definition sets are encrypted.

After running the Batch Module you can test the exit code in batch files (.CMD / .BAT) to find out whether running the started FlowHeater Definition was completed successfully. Code values are

Options only for TextFile, Excel and XML Adapter

Using the /ReadFileName and /WriteFileName options in the TextFile, Excel and XML Adapters you can define which file should be read or written. If a different Adapter is present on the respective side, attempting to use this option will abort the run with an error message.

As of version 2.x all the options you selected using Designer in the Test and Execute popup are saved within the FlowHeater Definition. You only need the options detailed above  when you wish to change the predefined options during batch execution.

e.g. You have a very large volume of data you wish to import/export. While you are setting up the Definition and testing it in the Designer, you select the option to process a maximum of 1000 records. This setting is nevertheless stored in the Definition file. If you now try to run this Definition using the Batch Module without making further changes, only the first 1000 records will be processed. So that the Batch Module processes the complete number of records available, you need to override the option /MaxRows with the value 0 in the task parameters. See example.

This will process all available records/rows, regardless of the predefined setting in the Definition file.

Structure of the UTF-8 Parameter file for option /ParameterFile

The UTF-8 file specified by this option can be used to pass any number of FlowHeater Parameters to the Batch Module, which are then assigned before execution. To ensure special characters, such as symbols and umlauts , are processed properly, the file must be encoded as UTF-8 (Codepage 65001). One Parameter can be set per line e.g. "Parameter name=value". Blank lines are skipped and the text on lines beginning with the "#" character are ignored. These can be used to insert comments and notes into the file.

The batch module makes it is easy to export data on a regular basis, for example, every night you could export the day’s turnover figures into a CSV text file automatically. Further potential uses include taking flat files or test data, formatted with fixed column widths, and importing these on demand into an SQL Server database for testing purposes (a feature sure to bring a smile to your developers).


The following examples illustrate the batch module in action