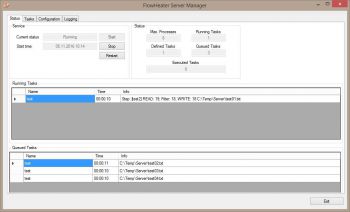 FlowHeater Server ManagerAt last, the anxiously awaited first FlowHeater Server Version has now been released. The features of FlowHeater Server include running scheduled and event triggered automated tasks without the need for user login. High levels of flexibility were the focus during development, for this reason not only can FlowHeater Definition files be executed, there is also support for EXE files  as well as scripts with extensions CMD, BAT und PS1 (=Power Shell).

FlowHeater Server is scalable from the “lowly” workstation to the high-performance server with multiple processors.

FlowHeater Server is automatically licensed with a valid Company License (Standard or Runtime) and so can be used for free.

AddDays Heater exceptions by days of the week

In a similar manner to the DaysDiff Heater, it is now also possible with the AddDays Heater to specify particular days of the week and a list of specific dates to skip when calculating the date offset. For example, if you wish to add 20 working days to a given date, by ignoring all weekends and public holidays.

This update mainly implements some minor corrections and improvements to FlowHeater Server. It is now possible to start tasks defined in the FlowHeater Server by hand. This makes it much easier to find the cause of problems when tasks do not run as expected. For example, in FlowHeater Server Manager you can now view a display of the live results of programs as they run.