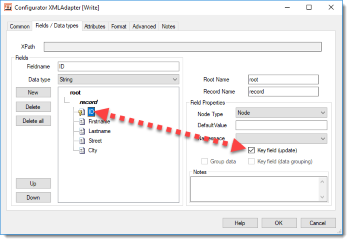 XML Insert/Update - key fieldsThis version extends the XML Adapter with another powerful feature. It is now possible to append content to existing XML documents (INSERT) or to update existing data using defined key fields (UPDATE), in a similar manner to SQL. Of course, the XML Adapter also supports UPDATE using a unique key composed of multiple XML nodes/fields. By using this function some fairly complex XML documents can now be generated in a series of processing steps.

Excel Adapter – fields not explicitly set are ignored during an update

Previously, when an UPDATE was performed on an Excel workbook, any fields that should not be updated needed masking out in the Configurator of the Excel Adapter. As of this version, unfilled fields are automatically excluded from the update and denoted "FH: [not set]" in the result display.

Warning: So that older versions continue to function without surprises, this feature only takes effect when used with a Definition created or saved by the latest FlowHeater version.

When a RUNTIME Definition is created using the FlowHeater RUNTIME Designer, you can now optionally specify whether the Definition can also be executed as a test run by your customers in "Test Mode".