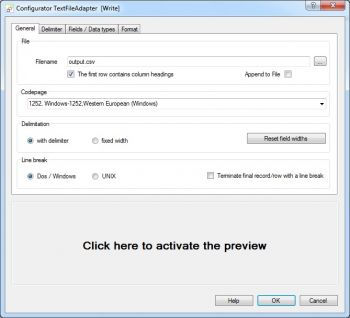 A preview in the TextFile Adapter in the export mode on the WRITE side is only shown when this is explicitly confirmed as wanted (click in the preview area). This significantly speeds up the processing of large CSV database export Definitions. It prevents extra accesses to records on the READ side being needed, because these could result in additional maintenance of the database server.

Previously the scripts processed by the .NET Script Heater were always recompiled prior to the start of a Definition. In the Designer this led to unnecessary delays when starting a new Definition for the import/export of data, because the script must first be converted. As of this version, the script is only compiled once, prior to the first run of a new Definition, or following any amendment of the script.