The sequence may subsequently be amended using the context menu of the Heater (right mouse click), with the option "Change incoming sequence," also at any later time.

The Append Heater can also be used to generate strings used for grouping data. 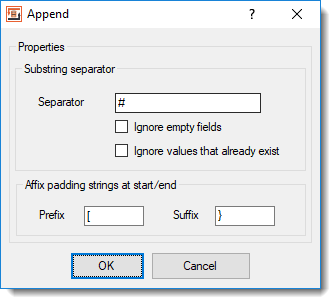 Substring separator: With this option you can specify a separator character (or string) that will be inserted between the individual strings as they are concatenated together.
e.g. You have the following strings as input parameters:

If you specify the separator as a “#” character in this instance, the Append Heater will output the string “one#two#three“.

Ignore empty fields: If you check this option, empty input parameters are skipped and there are no occurrences of two separators in sequence.
e.g. You have the following strings as input parameters:

Ignore values that already exist: If you check this option, values that have already been inserted into the string are skipped and these are not appended to the generated string again.

Affix padding strings at start/end: This option enables you to add static strings to add before and or after the concatenated string.

The Append Heater is used in the following examples.